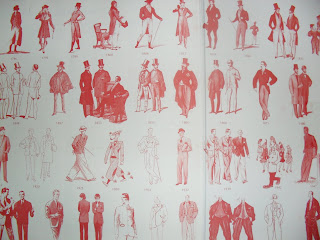 ch attention is genrally given to mens fashion, because it can seem somewhat monotonous to some, with the same idea and elements continuing through each season. And i guess there's also the male physique to consider which can seem too regular, without the lumps and bumps and beautiful curves found on a woman. So upon looking through the history of mans fashion, ill admit i didnt really expect much, and being somewhat bias i do still appreciate women's fashion more. Howveer, having sadi that, i found this book called A History of Men's Fashion, Farid Chenoune, in the library and was intrigue by the styles and evolution of men's dress. There were a few styles that stood out to me belonging to particular eras and/or regions or cultures. One example was The Men's Dress Reform Party who were around durint the early 1930's and, despite having establishments in Great Britain, Austria, Canada and the French Riviera, eventually lost momentum. 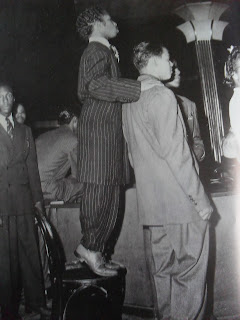 r style i found amusing was the zoot suit, seen here on young african men at the Savoy ballroom in 1938. Apparantly the Savoy in Harlam was the it place for blacks in the US, and saw the development of a somewhat comical yet refined style.
"... The men are surprisingly elegant in their long, roomy jackets like that of a fat man on some skinny fellow. Pants are tight at the ankle, falling in folds between he calf and shoe. Colours are both subdued and loud."
(Jacques-Lauren Bost, Trois Mois aux Etas-Unis, 1946).

The zoot suit came about sometime around 1935 in Harlem nghtclubs, such as the Savoy. The outfit consisted of an oversized jacket with wide shoulders that fell around the knees and were matched with low-crotched zoot pants that were worn with suspenders and would sit high above the waist, tight till they gradually skimmed the hips, bagged around the thighs and narrowed toward the ankle. It was an eccentric look that was finished with a bright tie and hankerchief, an "endless watchchain, and a wide-brimmed hat." ( Chenoune. F, 1993). On thinking of what this suit might look like, my first thought was of Jim Carey in The Mask, in a scene where he's on a date at some jazzy bar wearing a bright yellow zoot suit and wide-brimmed hat, perfectly matched with his bright green masked face. There's a sense of class and frivolity in this style that i would match to the shimmy dresses of the 1920's.


It's intersting to consider the foundations of the zoot suit and the ideas behind it, and i thinkthis passage explains it perfecty, "..There was a certain tradito behind such stylishness. Like workers who were proud of their clean and tidy clothing, taking care of their appearance and dressing up in their Sunday best on holidays, American Blacks - especially musicians - rejected the affected slovenliness of bohemian artists who has tried to set themseves apart from upper-middle class sociey starting in the 19th century. Black musicians wanted fine suits, magnificent ties, shiney shoes. There was only one way to dess - up...The zoot suit was not just the latest expression of this dream of gentility, it was the first tem to constitute a real fashion exploit. Prior to the zoot suit, stylish Blacks had, of course, already influenced male dress, particularly in New Ypork and Paris in the 1920's, among high society and shady circles that frequented black nightclubs in Montmarte and Montparnasse. But their impact had remained limited. The zoot suit, on the other hand, would model the look of many a gentleman during the 1940's, even inspiring the "bold look" promoted byt the fashion industry in 1947." (Chenoune. F, 1993)

Posted by The Fozmeister at 9:18 PM