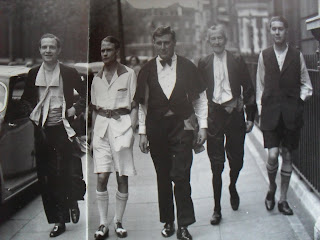 THE MENS DRESS REFORM PARTY
- sought to "reform (men's) clothes with as much profit to health and appearance as women have recently achieved." (A.C. Jordan, letter to The Times, 17 June 1929.

While reading about the history of mens fashion, i found an image and a bit of information on this group and found them intriguing. They're a bunch of men dressed in radical clothing, for the time, trying to express themselves and freeing themselves from the shackles of traditional mens attire. Simply put, they take elements of mens dress and experiment, coming up with some outfits you could wear today, and others most men in the 21st century wouldnt be caught dead wearing.

"They disapproved of pants, neckties, suspenders and hats, and favoured velevet tunics, roomy shirts, breeches and stockings of artificial silk, open "Byron" collars, summer shorts and sandals as town wear; they also advocated tennis shorts and bathinf trunks at a time when men wore long trousers on the tennis court and full bathing costumes at the beach." (Chenoune. F, 1993)

They were essentially radicals, like the women before them, who threw away their corsets and embraced a more natural feminine silhouette, rather rebelling against the traditional maculine forms and dress, for a more expressive style.
Posted by The Fozmeister at 8:15 PM