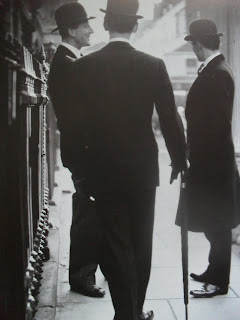 to see how social and poltical activities inform fashion, as much as some would like to seperate the two.
With the end of WW2, Europe saw itself under a lot of strife financially, so of course the US leant a hand and was able to establish its self as one the global super powers. This eventually lead to the Cold War, where both he US and the USSR fought to appoint themselves super powers, and began the battle between the Communists and Captalists.
What does this have to do with fashion you ask? Well the war allowed the US to impose its influence on Europe in all aspects. this is the time when globalisation and consumerism began to flourish, and the capitalist system began sprouting its greedy, money-grabbing hands, (not that im opposed to it all). This all relates to the image above, as it depicts Britain's reaction to US influence in the 1950's. The British upper class adopted fashions present during the reign of Edward VII, which involved vests, narrow trousers, velvet collars, bowler hats, gloves and rolled umbrellas. This new, adopted British style was described as The Neo-Edwardian movement.

Then there were the Teddy Boys. These boys hung 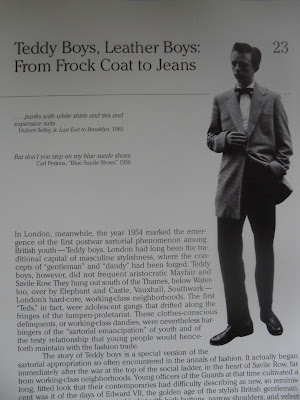 around the working class regions of London, they weren't aristocrats , in fact these were gangs of boys who carried a somewhat satorial sense of fashion. The look evolved from the edwardian movement, as these boys adopted it as their uniform. This led to a disdain towards the Edwardian, as these youths were responsible for post-war violance in the streets of London; carrying out racially motivated beatings, brawls in dance halls, muggings and vandalism. The Teddy look is represented in the image, right, where four-button jackets fell around the thigh, and were made with no CB seam. This was accompanied by drainpipe trousers and crepe-soled shoes.
This look was so associated with the violence in and around London during the '50's that strict dress codes were set in some areas of society, where Teds would be rejected from some social activites and public arenas as hooligan behaviour had been attributed as a characteristics of Teds.

Posted by The Fozmeister at 8:16 PM